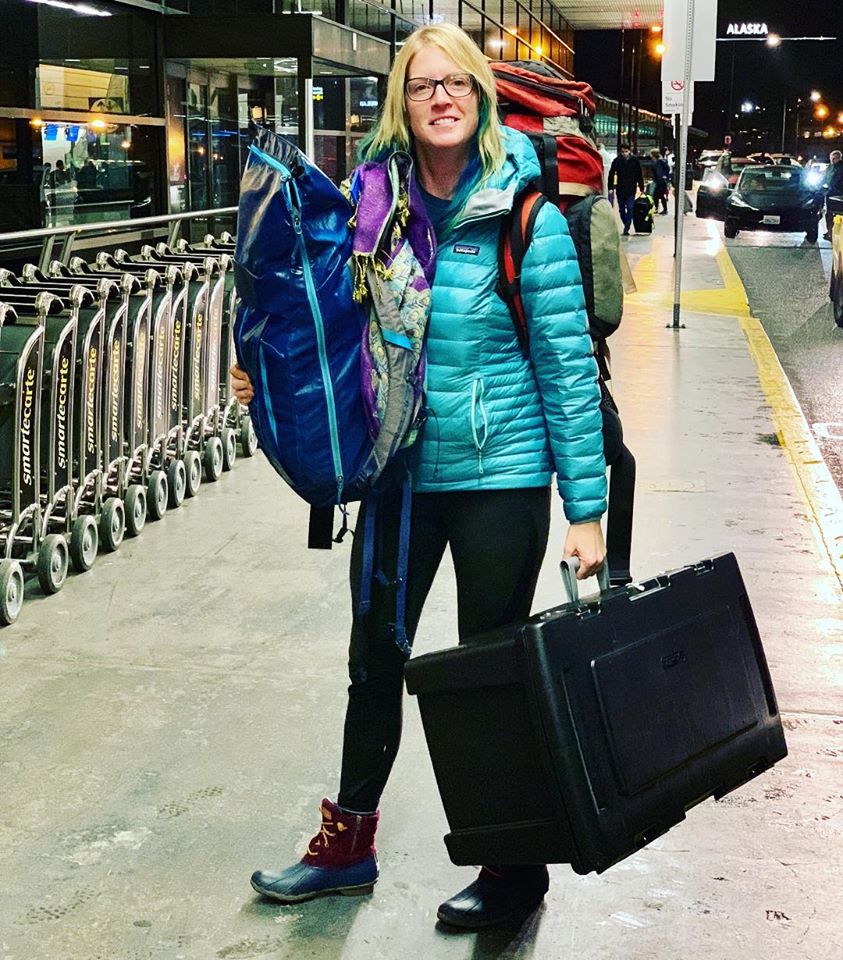 Antarctica is one of the most spectacular places on Earth, in my opinion – to get to the peninsula, I must cross the infamous Drake Passage, a 620 mile (1000 km) journey from the tip of South America. It’s around a two-day sail from the port towns of Punta Arenas (Chile), or Ushuaia (Argentina), to the South Shetland Islands. These islands make up the first stop nearest the peninsula. Some tour operators offer flights across the Drake for those who don’t want to brave the stormy waters and experience ‘the Drake Shake’. Despite being an Oceanographer, I get very seasick. Yet, that hasn’t deterred me from embracing some of the roughest open ocean and exploring all it has to offer.

I will be on the peninsula for two trips during the months of January and February – the southern hemisphere’s summer. During this time, it will never truly get dark. Instead there will be a prolonged period of magical twilight, sunset blending into sunrise, that lasts for several hours and makes for excellent photography opportunities. But I’m not here just for the photos.

I will first be onboard Antarctica 21’s Ocean Nova as Scientist and Lecturer conducting the FjordPhyto Citizen Science project I designed with my advisor, Dr. Maria Vernet, and polar guide experts Bob Gilmore and Annette Bombosch of the Polar Collective. The second trip, I will be onboard the Akademik Ioffe with Cheesemans’ Safaris. I will be coordinating citizen science projects as well as running FjordPhyto. This trip will have a scientific focus on marine mammals, in partnership with the American Cetacean Society.

When I first visited Antarctica in 2013 (McMurdo Station/Ross Sea), I was immediately struck by the lunar landscape, absence of any vegetation, and a looming active volcano called Mt. Erebus. I had no idea Antarctica had such mountainous topography! In my mind, it was a continent of flat white nothingness. In the interior – on the ~2.5 km thick ice cap – it is! But along the coast, it’s a strikingly magical sight with a landscape made of snow-topped mountains and jutting black rock rising straight from the ocean. The mountains along the peninsula were once a chain of volcanoes active millions and millions of years ago. Today, the one remaining active volcano is called Deception Island, which last erupted in 1970. The caldera left behind makes an excellent landing site for tourism.

In December 2017, I had another chance to visit Antarctica, this time to the peninsula, and was intoxicated by the beauty of thousands of snowy islands and coastal fjords speckled by an abundance of penguins, seals, and humpback whales. The deeply indented fjords resemble those of Norway, Alaska or southern Chile. When the sea-ice melts during the summer, routes open allowing ships to pass through the towering cliffs and channels. When I’m on any journey, my experience is always enhanced by an understanding of the region’s geography and biology. Maybe that’s why I became a scientist!

Antarctica is politically defined as land south of 60°S, but the physical oceanographic boundary of water masses located at the Polar Front makes a better demarcation for understanding the characteristics seen along the Antarctic Peninsula. The Southern Ocean encircles the continent and where cold water from Antarctica meets the relatively warmer waters of northerly oceans, there is a sudden change in surface temperatures ~3-6°F (2-3°C). This zone acts like a boundary isolating Antarctica. This isolation explains why Antarctica is much colder than the Arctic and why human discovery occurred relatively recently.

Approximate positions of the Antarctic Treaty CCAMLR boundary, Antarctica.gov.au (left) and polar front and the subtropical convergence (right), which are the northern bounds of Antarctic and sub-Antarctic water, respectively. Ceridwen Fraser, The Conversation.

Ancient Greek geographers had hypothesized there to be a southern continent to counterbalance Arctic lands. The name Antarctica derives from the Greek meaning ‘opposite the Arctic’.

Attempts to search for the southern continent occurred as early as 1699 by Edmond Halley and was not reached again until James Cook’s circumnavigation of the Southern Ocean in 1772 – 75. He suspected, from all the icebergs he encountered, that there must be a source further south. In 1819 William Smith sailed far enough to make first sighting of South Shetland Islands. In 1820 multiple explorers (Palmer, Bellingshausen, Lazarev) officially set sight on the mainland.

This remote continent holds a fascinating history of human exploration with pioneering voyages of bravery and hardship. However, Antarctica is not without its dark side. Early whalers and sealers hunted its resources to near extinction in the 1800s removing nearly all seals and ~2.9 million whales from the Southern hemisphere. This caused a significant shift in the ecosystem, that since has not rebounded to its original state.

The 1900s marked a more positive ‘Heroic Age of Exploration’ through expeditions to the South Pole along with many scientific endeavors. Today’s modern research stations demonstrate the importance of the area to science, providing a natural laboratory setting for scientists who spend their time researching Antarctica’s role in the Earth’s systems.

Relatively recently in 1959, the Antarctic Treaty was signed to protect Antarctica and it still remains one of the most remote and pristine places on the planet. Only scientific and peaceful activities (including tourism and regulated fishing) are allowed and I’m so excited to be down here with the ability to involve passengers in my research through the FjordPhyto citizen science project and to be a part of the education team sharing the knowledge of this place first hand.

Stay tuned for more posts to come! Thanks for reading, and please share with your friends.