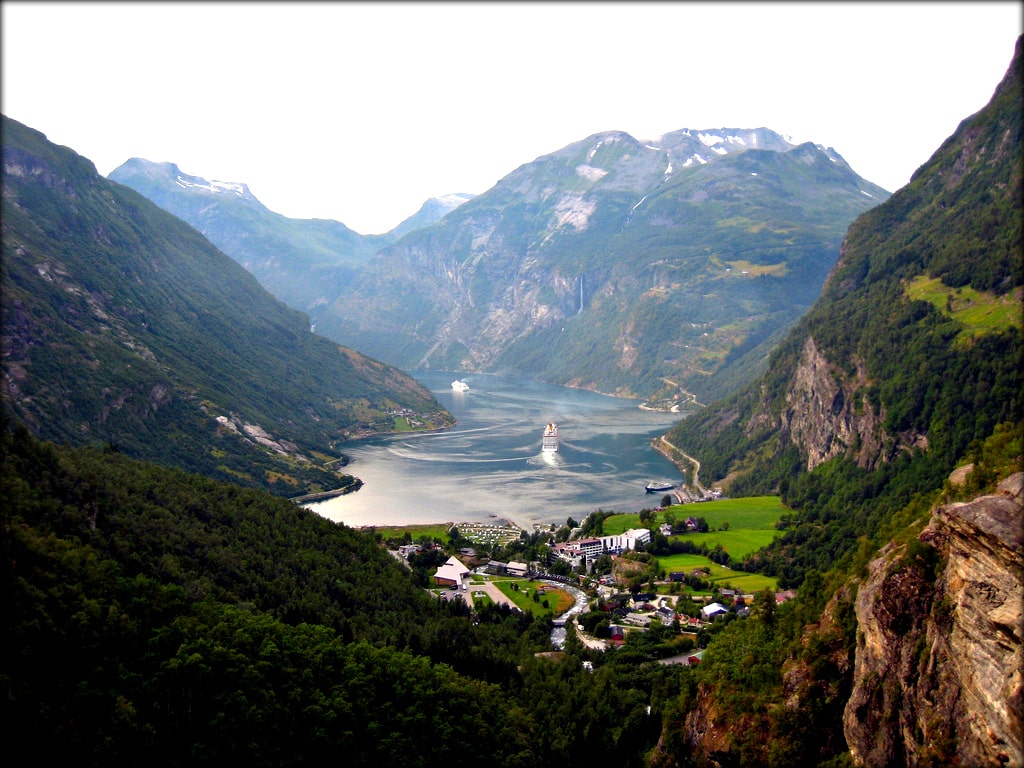 Fjords. You know what they look like, but maybe you’ve never seen, much less said, the word.

Let’s say it together: Fee-yor-d.

The word fjord derives from the Old Norse fjǫrðr, used to describe a narrow inlet of the sea. Fjords were first studied extensively in Norway.

Fjords are steep walled u-shaped valleys that were carved and modified by glaciers long ago during the last glacial maximum (i.e., the last time large ice sheets covered land to their greatest extent). Fjords are technically estuaries: places where land streams meet marine ocean. However, fjords are the youngest and deepest of all estuaries (four types of estuaries include: coastal plain estuaries, tectonic estuaries, bar-built estuaries, and fjord estuaries). These regions serve as important transition areas between the land and sea environments and provide habitat not only for humans (e.g., sea ports, tourism, and aquaculture), but also for a variety of wildlife.

Fjord Circulation: Deep sills allow for more circulation into and out of the fjord (above) while shallow sills restrict water movement creating poor mixing and stagnation, or zones of low oxygen (below).

Fjords are found in three regions where glaciers once were, or are still active: polar, sub-polar, and temperate. Think of Greenland, Iceland, Norway, Alaska, Canada in the North and Chile, New Zealand and Antarctica in the South.   The processes they experience depend on oceanic and glacial inputs. Glaciers that float on the water, or grounded at the water’s edge are called tide-water glaciers. Glaciers can also have retreated so much they no longer meet the ocean.

Half Dome Valley, Yosemite. Glaciers carved this typical U-shaped valley and no longer exist in the area. If this valley could meet the ocean, it would become a fjord. Image: Lech Magnuszewski CC

To study fjords, you also need to understand basic processes from glaciers. Glaciers around the world are retreating, which causes continued evolution to existing fjords. One stark example comes from the Columbia Glacier in Prince William Sound, Alaska. This video (click image) by NASA’s earth observatory shows retreat since 1986.

Fjords are places of amazing beauty and access to land and sea for humans and animals. They are also experiencing many changes due to climate and human influence. Activities such as aquaculture, mine till discharges, agricultural run-off, urbanization, sediment input, atmospheric warming, glacial melt, tourism, pollutants, deforestation, ship noise, and whaling are all activities that can alter fjord environments.

Thirteen students from around the world are currently learning all about Fjord Ecosystems through a five-week intensive summer course at the University of Washington’s Friday Harbor Labs in San Juan Islands, Washington. The main instructors Dr. Maria Vernet from Scripps Institution of Oceanography and Dr. Craig Smith from University of Hawaii have brought in experts from all disciplines to give guest lectures including Martin Truffer and Peter Winsor, Richard Dewey, Verena Tunnicliffe, Fabio DeLeo, Chuck Nittrouer, Brian Powell, Lisa Hahn-Woernle, Andrew Sweetman, and Mattias Cape. The course came in to reality through the Broader Impacts goals set in the FjordEco research grant funded by the National Science Foundation.

This course couldn’t be in a more perfect setting considering the Salish Sea region (Washington and British Columbia) hosts a vibrant fjord ecosystem.

The students taking this course range in their career stages from undergraduate to graduate level.  Each one is utilizing the knowledge gained during this course as a base for better understanding the dynamics of fjord ecosystems.

The FjordPhyto citizen science project, in particular, focuses on understanding the polar fjord dynamics located in Antarctica and Greenland. As temperatures rise, it is thought that fjords along the Antarctic peninsula will transition to behave more like the sub-polar and temperate fjords found in Chile and the Arctic. Fjords outside of Norway are very under studied systems and this course has been a fantastic introduction to all the potential research questions young scientists could investigate.